Whether you integrate the Multicrusher in a pump system or use it as a separate unit – its versatility is unrivaled! Quick access to the blade configurations means blades can be selected according to the situation and therefore provide variable cutting quality. The particle size required is defined by the choice of all the different blade configurations, teeth profiles and blade widths.

The industries and applications listed here are just a sampling of the diversity of Börger Multicrushers. 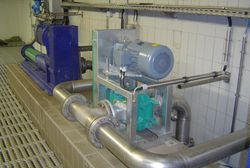 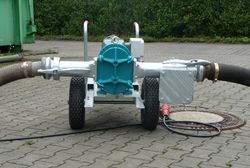 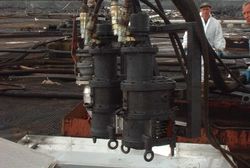 Highly viscous sludge deposits had to be removed from a tar pit. The problem with the pump systems already in use was the fluctuating viscosity of up to 50,000 mPas due to the temperature and the sometimes very large particles contained in the sludge. Both these factors kept causing the pumps to block.

The solution was the Boerger double-pack consisting of a  Multicrusher  and a Rotary Lobe Pump. The two units were combined in one frame and both operated using a single hydraulic motor. The entire unit is ATEX compliant and is operated immersed in the pit. 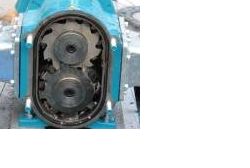 In the cement industry, many different materials and substances are used to fire the furnaces. A Japanese cement manufacturer fires its rotary kilns by incinerating fish. In fact, this is the by-product and remains of fish which are not sold and not economically viable.

The fish have to be chopped so that they can be burned effectively. The Japanese cement manufacturer was looking for a chopper to do this. After performing various tests with products, they decided on a Boerger Multicrusher.

The customer was impressed with the excellent chopping yield and particularly with the Multicrusher's ease of maintenance. Wear parts could be replaced by the customer's in-house maintenance staff directly at the installation site without dismantling any pipe or drive systems.